Paul was born on the Island of Samos in Greece. At a young age he left seeking new horizons of education and career. He spent considerable time in Greece, Lebanon, Italy, France, Austria, and the United States studying and building his international reputation. He currently resides in Clearwater Florida most of the year, but spends his summers in Karlovassi on Samos Island in Greece.

Paul has a PhD in Fine Arts and a Master’s Degree in Digital Arts & Graphics. He has spent 40 years as an active Fine Artist and Art Instructor, owning his own school and Art Gallery, and continues to add to his own educational training.

Outstanding exhibitions over the years have included:
• The American University in Beirut Lebanon where he was honored by the presence of the Prime Minister Abdalla Yiafi, the night of the Grand Opening which was covered on television.
• Center of the Arts, in Athens Greece, a 60 day solo Exhibition by the City of Athens, also including television coverage.
• Carnegie Conference Hall Rockefeller Center New York, where attendance numbered 2600 plus at the Grand Opening. Guests included dignitaries, celebrities, representatives from different educational & cultural institutions and representatives of the City of New York & the United Nations. This event was covered in local media.
• Paul was appointed to create a painting titled "Olymbiaki Ekehiria" for the "Olympics in Greece 2004", the title of the painting was also the name of the entire exhibition.

His paintings and sculptures are collectable and in high demand. Some collectors of his work own more than 25 of his original pieces. In his Studio in Clearwater Florida, Paul Foropoulos paints, sculpts and trains other talented individuals to become successful artists and proficient at their craft. He does that through classes and private lessons at the "Artists Training Center of Foropoulos Studios of Fine Arts". He travels for Art Seminars/Workshops and trains other artists on a personal basis whenever and wherever he can. 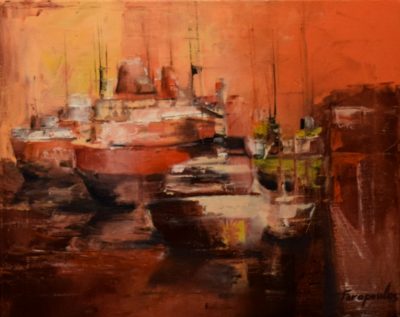